On 28 November 2019, the Austrian company became the fourteenth die producer worldwide to be certified by BOBST in Lausanne. The joint objective of the tooling project is to provide optimum tools for the market. The aim is to utilise the high production potential of the BOBST diecutting machines as fully as possible. It has long since been generally known that productivity always occurs as the interaction between machine and tool. This not only concerns the full production rate of the machine, but also optimum makeready times, so that as little valuable production time as possible is wasted. 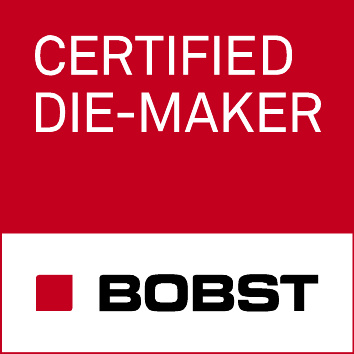 Our Bieling & Petsche colleagues are naturally proud of having mastered successfully the evaluation and ultimately also the tool performance test. This is also why it is our own firm commitment to offer our customers this service in their daily work.

The BOBST certification programme was initially started for so-called SP machines, which are primarily used in folding carton production. However, it is planned to expand it to include SPO machines for corrugated board conversion. Bieling & Petsche Stanzformen GmbH has already announced that it wants to be certified for SPO machines as soon as possible. The company decided to use a CITO high-performance tool for the performance test in Lausanne. The technical design of these tools conforms to the BOBST specifications. In addition, high-quality CITO materials are used, which were developed specifically for use in the diecutting process.

CITO remains a partner for success and therefore offers all materials as well as technical support for the production of high-performance tools to the whole market. The CEO of the CITO Group, Jürgen Mariën, said:

“I was fully convinced by the BOBST certification concept from the outset. For me, such certification is not a marketing action, but a very good opportunity to establish tool standards and thus to help to increase productivity and added value in our industry. CITO wants to and will make its contribution to achieving this.”